The Lakewood arts community around 14th Avenue unveiled another addition to their public arts offerings with the new “Community” bench on June 24.

The bench was created by sculptor Austin Weishel and fabricator Tim Driscoll, both firefighters, after being paired by Travis Hopwood, the prior No. 1 station captain.

The bench was a collaboration between West Metro Fire and the City of Lakewood, with funding provided by the city’s Neighborhood Participation Program.

The bench incorporates a fire ladder into the design, and there are custom bronze pieces that augment the work.

Here are some of the best things we heard at the unveiling:

Point 1: Austin Weishel — This was a new kind of project for me, but it was interesting to combine Tim and my abilities on the project. And now we’ve made a piece that will last forever.

Point 2: Tim Driscoll — The captain reached out to us about creating a metal project for Lakewood, and it was an honor to be asked to contribute.

Point 3: Maddie Nichols — I think the final work is great, especially since it signifies firehouse No. 1. It’s a great addition to the firehouse and the neighborhood. 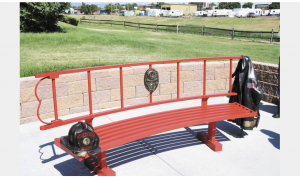